This article is quite different from the other posts in this blog. Here I write about experiences and reflections that are deeply personal. These have been days with conversations unlike any I’ve had before, and the memories and impressions will be with me for life. So the following text comes with no references to information sources, these are all my subjective thoughts. All photographs in this article are by photographer Rickard Aall.

The Hong Kong Committee in Norway, which was established last year, held its first regular annual general meeting on Thursday February 27th. The program was not very different from similar events, with propositions for changes in the statutes, budget and accounting, and board elections. This may seem dull, but a highlight for me was when I was elected board member of the committee.

The evening’s most exciting part was definitely the seminar that followed, which was the accounts from members of a visiting delegation from Hong Kong of the present situation in their home city. And some blurred visions of the future. After this, dinner was served and we got the chance to mingle. In the time leading up to the hand-over to China in 1997 I tried to follow how this all evolved as close as I could (and this was after Internet became available, which had given the flow of information a boost). I was fortunate to be able to speak with Demosisto’s Wong Yik Mo. I asked about how the different generations in the pro-democracy camp in Hong Kong view each other. It was interesting, and very special, to listen to reflections from someone who knows people like Martin Lee and Emily Lau so much closer than anyone I’ve ever met. 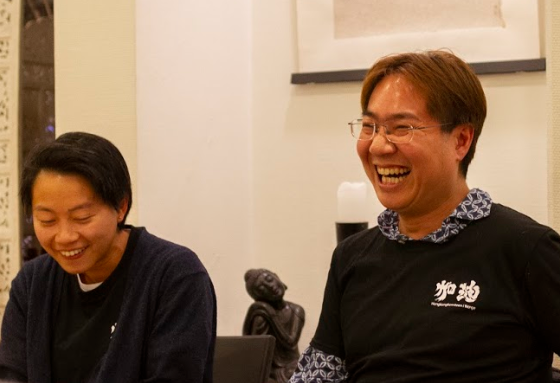 On the evening of the following Saturday the Hong Kong Committee hosted a dinner party in honor of our guests from Hong Kong. We were fortunate also to invite and meet guests from the Norwegian Uighur Committee, Voice (an organization for exiled Vietnamese people), the Peace Research Institute Oslo (PRIO) and the Nordic Committee for Human Rights. On the menu was a fish soup and a vegetarian alternative, both prepared by the Hong Kong Committee’s chef-of-the-day, Magnus. For desert our deputy leader had persuaded his husband to bake two cheese cakes, which turned out to be quite irresistible. The entire menu was praised by all, no matter our diverse backgrounds. The mood was flying high (pictured here is the committee’s leader duo), and for a brief period we managed to enjoy life despite the gloomy backdrop with renewed episodes of police brutality the same evening (related to the commemoration of the 8-31 protest). 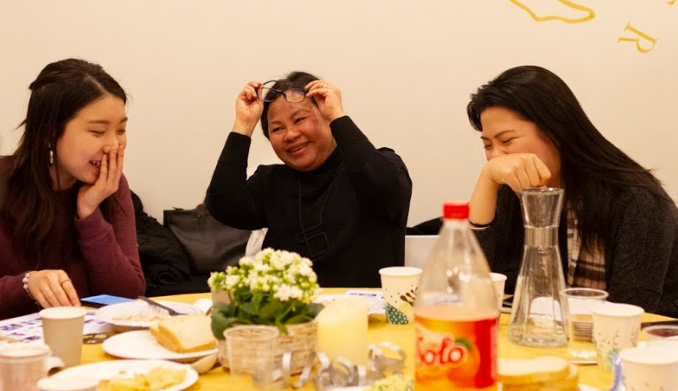 Before the cheese cakes were served, it was time for my contribution: a quiz! It soon became easy for all to see that I was as little in control as I usually am: my request to form teams by pairing up was not universally respected. A number of teams with threesomes emerged, something I accepted as acts displaying solidarity. There was however a potential fall-out, as the prices for the teams that made the podium were not really scaled for this eventuality.

After some minutes the venue was abuzz with rumours of unlicensed use of electronic gadgets. The quiz master had to enter a mode of supervision of the 10-12 teams to make sure that the most knowledgeable team would be victorious. The worst part of this job was when a shadow of suspicion was cast on members of the hosting committee. However, all such attempts were duly choked before any harm was done. Central in this image is the committee’s treasurer, her husband, and a prying silver-haired inspector. 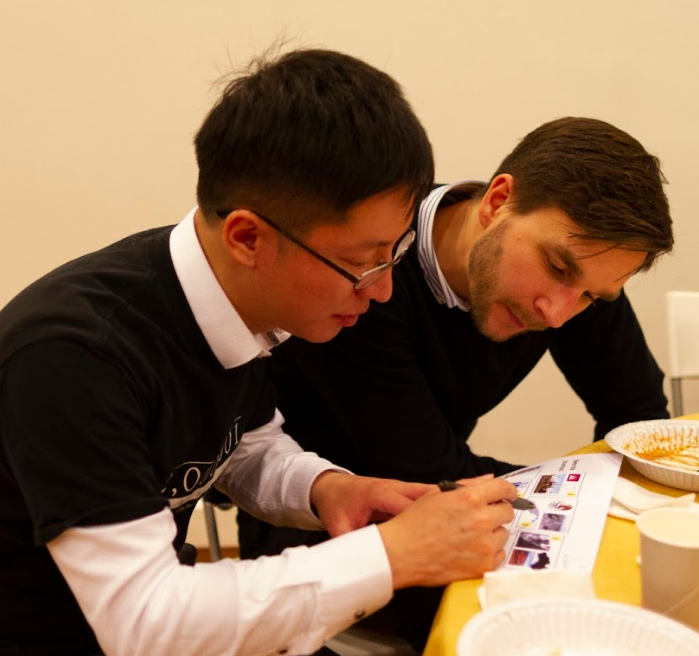 The quiz master (yes, me) found that all teams performed excellently, even though the final scores were of a rather diverse nature numerically. This report from the quiz session ends with a photograph of the team of Wong Yik Mo and Haakon Gjerløv of PRIO. Finally, it must be admitted that the hosts turned out to lack any generosity towards the guests, as they unabashedly laid their hands on most of the prices. This will be a major item on an upcoming board meeting!

This started during dinner when I was seated next to two Uighurs. They came to Norway as refugees from East Turkestan (Chinese occupied Xinjiang province), and they have family members remaining in their homeland. The Uighurs are victims of persecutions that range from attempted brainwashing in “training camps”, exploitations bordering on slave labour, and to repetitive physical abuse. I already knew this, so we chose to talk about their families. They naturally expressed deep concerns, and told me that they had not heard from their family members ion East Turkestan since 2017, neither by mail nor by phone. The fate of the Uighurs is heartbreaking, and must receive much more attention internationally!

After dinner I first got the chance to speak with Ted Hui, who can frequently be seen on the streets of Hong Kong trying to persuade the police to abstain from all unwarranted use of force. He is a legislator who was elected by the people, constantly faced with threats from the police, and more: a victim of a point blank shower of pepper-spray, with protective gear being ripped off by police officers. We had a very interesting conversation about challenges related to connecting with the Hong Kong minority who supports the pro-Beijing camp. Well, the conversation was interesting for me!

Later I was lucky to spend a few minutes with Jessica Leung who works as a pro bono lawyer providing legal representation to detained and arrested protesters. In her work she has seen protesters with swollen eyes after being beaten up inside police stations, where the press and their cameras cannot document police violence. As I’ve not yet visited Hong Kong, Jessica encouraged me to come to Hong Kong late this summer, possibly around the time of the elections to the Legislative Council. We’ll see, but the temptation is definitely on the rise. In the photograph Jessica and one of the front liners sing a protest song, accompanied by Ted (sitting) and Mo playing the piano.

The most profound impressions were still to come. I was so fortunate to have the chance and sit down and talk privately with the two front line protesters. They are among the young people building barricades and setting them alight with petrol bombs to escape from close encounters with the violent and brutal Hong Kong police force, to avoid becoming detained. They told me about their rage when they witnessed grossly unproportional use of force by the police on June 12th against peaceful demonstrators trying to resist the end of the rule of law in Hong Kong. These young people, who in 2047 will be younger than I am now, are fighting for their freedom for decades to come. They told me that if they stop, they will lose everything. It’s an argument that can’t be disputed. I saw no aggression whatsoever when we spoke, in stead they expressed their gratitude that I was listening to them. A world turned upside down; I’m forever grateful for the huge sacrifices they make, and I will keep worrying about their future as long as the situation does not dramatically improve. You’re in my heart.

My son is in his twenties, and a member of the same generation as Hong Kong’s front liners. Through the years I’ve met many of his friends, and they are a generation that gives me a lot of hope for the future. Given a similar situation in Norway, which fortunately is presently dystopian fiction, I’m convinced that their reactions would be very similar to what we’re witnessing in Hong Kong. Hong Kongers are just like Norway’s finest. And then some!

The original version of this article was written in Norwegian, and posted online on 2 March.

One thought on “Social events with the Hong Kong delegation”